Our dancing friend Cathryn has translated this page 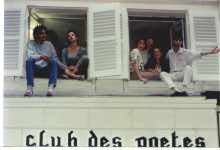 Founded in 1961 by Jean-Pierre Rosnay in order to
"render poetry contagious and inevitable"
because it is "the anti-pollutant of mental space,
the counterweight and the antidote for an existence which
tends to turn us into robots",
the Club des poetes has "many strings in its lyre":
* It is a place for presentations
* It is a place for meetings and exchanges
* It is a place open to the world

Every night (except Sunday) anyone can come to dine or to have a drink.
Starting at 10 o'clock, actors and singers interpret poems, from
Le Cantique des Cantiques , to young unknown poets,
making the rounds past Villon, Baudelaire, Rimbaud, Anna de Noailles, Lorca,
Saint-Pol-Roux, Marina Tsvetaeva, Desnos, Aragon, Cťsaire, etc.

As theater is made to be played, so is poetry above all made to be voiced. A book is never just a refrigerator where one can interpose notions, ideas, emotions, sensations, in the intent of sharing them with those whom one loves, or, in an even more ambitious project with the po po po po po po po po ... (21 fois) posterity".
Raymond Queneau

Two Wednesdays a month the members of
the Association of Friends of the Club des poetes
get together to share their poetic discoveries. The ACP publishes
the journal "Vivre en Poťsie" and edits a collection
poems : the Collection du Club des PoŤtes.

Pablo Neruda (Chili), Octavio Paz (Mexique), Ma Desheng (Chine),
Ana Blandiana (Roumanie), Mahmoud Darwich (Palestine),
Vinicius de Moraes (Brťsil), Georges Schťhad? (Liban), ...
you can never finish quoting poets from all corners of the world
who have come to the Club des poetes.
And when they don't come to us, we go to them.
Le Club des PoŤtes organizes tours in France
as well as internationally and has created delegations in 17 countries.
best aaa replica watches, tag heuer replica watches for men